THE MAGIC AND MYSTERY OF GURUJI’S MANDIR Away, far away from the clamour of the capital lies a place where people’s souls can be charged and their hearts seduced with beauty. Here, the air is fresh, the grass is green, and the eye brought up short by a gleaming white marble structure mounted by a massive, granite  linga .

The  linga proclaims the fact that this place is the seat of Lord Shiva. It climbs up to the sky, prophesying the rise of Shiva  dharma or righteousness, and a new dawn of religious consciousness. A beautiful statue outside in the garden shows Lord Shiva as a handsome, fair youth. His wide, kind eyes are open, His face is relaxed in a half smile, and His hand raised to grant blessings. His seat is an enormous, open lotus flower and He has for His canopy a five-headed serpent (the  sheshanag ) that sways above His head.

Inside the complex, a gleaming brass visage of the Great Lord shows Him in the same posture. Significantly, Shiva, the supreme  yogi , is not meditating. He is on His tiger mat and has just uncrossed one of His legs, and is ready to look into the problems of His devotees.

The sacred words Om Namah Shivay  are emblazoned inside the main hall.

They offer an immortal promise: that Lord Shiva’s and indeed Guruji’s help (for they are one and the same) are at hand to anyone who but trusts Him.

AN IMPOSSIBLE DOME GETS BUILT

That these grounds of the Mandir are indeed Lord Shankara’s favourite is borne out by the stupendous incidents that have been witnessed by those involved in its construction and those who frequent the temple.

Indeed, the indications of the greatness and power of the mandir were apparent right from its inception. The unique structure of the mandir’s dome was very difficult for the architect to imagine and realize. As instructed by Guruji, the dome was to be in the shape of a shivlinga (divine symbol of Lord Shiva’s non-corporal aspect), which required it to be circular at the top. This was possible provided a solid base was given to the structure. But Guruji wanted a hollow base. The architect believed this design was unfeasible and put up stiff resistance. But, finally construction began on the above-mentioned lines. The lower half of the linga was constructed without any problem. But the construction of the circular top, which was always a difficult proposition, was not easy. The top developed a crack in the absence of any sort of support.

Guruji’s construction in-charge, a Sikh gentleman known as Raghuveer – who incidentally has very weak eyesight (and thereby hangs another fascinating tale of Guruji’s power at work for those who would seek and find) – was told of the problem. He asked the constructor to give it a second shot, but the result was disappointingly the same. The problem was put before Guruji. And Guruji said: ” Ask them to try it once again, this time I will provide my base for support .”

So, construction was taken up for the third time – and the circular top was completed without any cracks whatsoever. Guruji’s support had evidently made up for the inherent physical weakness of the structure!

That it is His spiritual force that still keeps the structure from collapsing was also proved. When it was built, the shivlinga was made up of lightweight tiles. Later, the lightweight tiles were replaced with granite tiles. On top of that, a heavy chandelier that roped down to the hall was hung from the middle of the linga’s  dome. Thus, not only was an unfeasible structure built, weight was added on to it. But, with Guruji’s grace it remains resilient and stable.

EVEN THE SOIL IS MIRACULOUS

As the mandir and its surroundings were developed, it was clear that the place was (and is) indeed favoured by Lord Shiva. Even to the casual observer, the growth of the plants and trees was exceptional. A lady planted at the temple a few of the flowering plants she had bought for her farmhouse. To her amazement, the same variety of plants taken from the same source bloomed into flowers of at least twice the size in the mandir as compared with those planted at her farm-house.

Another man had a similar experience. He planted a lemon tree at his home, but it failed to bear fruit. Two more seasons passed by without a sign of a single, yellow lemon. He then decided to replace the tree with a new plant and got the barren tree planted at the mandir for decorative purposes. Seven days after it was planted at the mandir, the tree, which failed to bear fruits for three successive seasons, was sprouting buds. And within a couple of weeks, it was laden with lemons. When the lemons were taken from that tree and cut, they were found to be seedless. Evidently, Guruji had done some quiet bit of bioengineering!

And not for the first time! Once permission was sought from Guruji to have the lawn grass re-carpeted. He gave His go-ahead, but there was not much time left. A temple function was fast approaching. But, the temple gardener proceeded with the task. Once the grass was laid down, it was clear that the decision was not correct on two counts: more time should have been given for appreciable growth of the new carpet of grass; and the variety that had been selected was one that tends to cut the feet initially and becomes soft only after the first cutting, which was out of question due to paucity of time.

However, to everyone’s amazement, the grass grew exceptionally fast. The first cutting was taken up well before the function and the growth was so good that another trimming session was managed just before the function. The quality of the carpeted lawn on the day of the function was absolutely admirable and the Gurus of grass growth were stumped!

THE GURU IS ALWAYS THERE 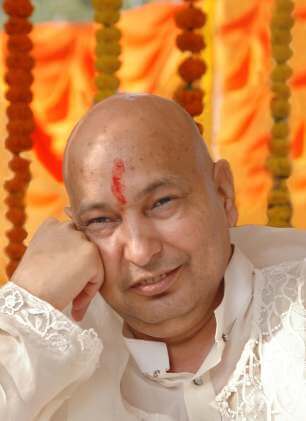 There are other inexplicable goings-on in the mandir that hint at a supernatural force going about its benign work. Regular visitors to the temple have witnessed the idol of Lord Shiva on the temple grounds changing expressions. And this year (2006), the brass idol in the hall decided to play Holi (a festival of colours). Two very amazed ladies diligently Brasso-ing the brass idol found a dash of colour at a spot on the surface.

It is also certain that the omniscient Guru has the temple within His protective gaze all the time, regardless of where He is present physically. A school teacher recounts a memorable experience.

She had gone to the mandir on the occasion of Guru Poornima. She decided to go to the mandir very early in the morning so that she could attend school later. She reached the mandir at 6:15 in the morning. Only the gardener saw her visit the place to pay her obeisance to her Guru on this auspicious day. And – as was later confirmed – he told no one of the visit.

But someone else had also seen her.

On the teacher’s very next visit to Empire Estate, Guruji called her and said: “Aunty, you had visited the mandir on Guru Poornima at 6:15 am. I was watching you in my meditation.” All these experiences have left the sangat  wondering what is more amazing: Guruji or the temple grounds?

May Lord Shiva allow all to come to His sacred grounds. May He grant all the wishes of those who come. And may the Satguru forever keep us in His  sharan .