Guruji: Our Father, Saviour and Shiva 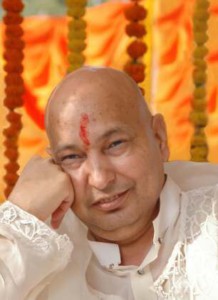 In this day and age, we are indeed lucky to be in the benign presence of Guruji. He is not in the gaudy public eye, but in the hearts of many of those to whom He is known simply and purely as Guruji.

Guruji delivers no  pravachans  or sermons. He holds no rod of discipline. He makes no tall claims; He markets nothing. He is the embodiment of compassion, of the easily-pleased Lord Ashutosh. No wonder people come in hundreds to seek His blessings so that they can be cured of pain and sufferings.

And He heals. He heals with a mere look, showering His blessings through eyes filled with the ocean of love for all those who are troubled.

Any devotee can testify to Guruji’s saving grace, which steers him away from troubled waters, in any and every hour of need. And hundreds of thousands who have come to Him – troubled by disease or mental strife, discouraged by the world – have not only found the divine healing touch but also the way out of suffering, the way to beat the strain of modern, material life.

Those who have gone to Him in their hour of grave peril have found succor without their having to ask for it. Stories are legion of Guruji’s miraculous cures.  Satsangs (literally, the company of truth; loosely, a fellowship in which devotional songs are listened to and experiences in faith recounted) are replete with spellbinding talks of diseases spirited away, bothersome bosses held at bay, just promotions finally obtained, and even weather made to obey Guruji’s dictates. Through satsangs Guruji allows people to share their experiences so that others too can take full benefit of Guruji’s being.

While many preachers in this world help a person progress on the path of salvation, Guruji is into action. His is an entirely practical approach that leaves no room for doubt. He takes the burden of His devotees upon Himself. Their problems become His and He spirits them away. Like a loving father, He stands guard over the faithful, He brings smiles into not only the devotee’s face, but also into the lives of those whom the devotee holds dear. Thus, for those in His sharan , miracles are a norm, with every devotee being in a position to claim having experienced life-altering instances that can only be called miracles. Yet, nothing under Guruji’s protective umbrella is by chance, everything is by His choice alone. And His choice, revealed through His  hukm  (order), assuredly drives you towards the brightest destiny possible, one that is often beyond the limits of the devotee’s imagination itself.

To have Guruji’s  darshan is to be blessed forever. To take refuge in Him is to touch the hem of Immortality, which grants you the courage to laugh off worries and diseases. To be led by His guidance is like being in a fort, protected against all odds, unscathed by the bad times. To be granted to follow Him is to touch the wellspring of life itself, of love, of sweet sanity; it is to walk the humble road of service and devotion.